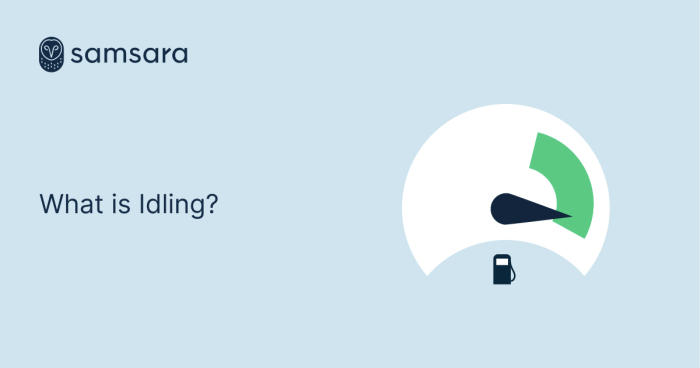 Get Started With Samsara

When a vehicle or equipment’s engine is running, but it’s not in motion or in use, it's in the state of idling. While some idling is unintentional and cannot be helped, prolonged idling can waste fuel, increase maintenance, cause pollution, and more. Learn more about vehicle idling, why it’s costly for fleets, anti-idling laws, and idle-reducing technologies in this guide.

What is vehicle idling?

Vehicle idling is when a vehicle’s engine is left running when it’s not in motion. In the fleet industry, stationary commercial motor vehicles and heavy-duty construction equipment are commonly found idling.

Idling isn’t always intentional; many people idle every day while stuck in heavy traffic or waiting in line at the drive-thru. Truckers often leave their engines idling to generate electricity  to maintain cab temperatures while they sleep. School buses idle while they wait for children to board fully. Whether intentional or not, idling consumes the same amount of fuel and generates the same amount of pollutants.

How long can vehicles idle?

Many drivers want to know how long they can leave their vehicle idling when parked. The short answer: it depends on the condition of your vehicle. How long your vehicle can idle depends on several factors.

Vehicles stop idling when something breaks in the system. Leaving a vehicle idling for long periods causes stress on the vehicle and adds wear and tear. Thermostats, fan belts, and hoses are particularly vulnerable if the vehicle is not regularly maintained. Also, if some parts are defective or on the verge of failing, the vehicle won’t be idling long.

Like personal vehicles, if the commercial vehicle runs out of gas, it will stop idling and shut down.

Idling a vehicle causes its battery to drain. Drivers will need to recharge or replace it before they can start the engine.

The downsides of idling

While engine idling may seem harmless, it has several negative impacts on the environment and public health.

Most businesses look for ways to cut costs, not create them. In particular, businesses with large fleets are always looking to reduce the cost of fueling their vehicles. However, when drivers leave their motor vehicle idling on the road during heavy traffic or when parked for long periods, it causes significant fuel consumption. Approximately six billion gallons of diesel fuel and gasoline combined are wasted—without even moving.

Vehicle idling directly impacts an organization’s bottom line. It’s estimated that idling for one hour can consume up to a gallon of fuel. A gallon may not seem like much, but incremental consumption over time—with no beneficial trade-off—adds up. As the price of fuel continues to climb, excessive idling wastes gas and can drain profits.

Idling for long periods isn’t good for a vehicle’s engine. Many drivers believe that leaving the engine running for a few minutes saves fuel and reduces engine wear instead of restarting. However, the reverse is true. Because idling damages the engine, the cost to maintain, or worse, replace the engine is far worse.

When your vehicle is idling, it’s not operating at its proper temperature. The fuel doesn’t fully combust and leaves behind a residue. This residue causes damage to fan belts, the thermostat, and the exhaust system, which costs businesses more to repair or replace parts.

When drivers leave their car idling for long periods, it releases fossil fuel emissions into the air, contributing to pollution and climate change. Argonne National Laboratory estimates that idling results in the emission of about 11 million tons of carbon dioxide, 55,000 tons of nitrogen oxides, and 400 tons of particulate matter annually in the U.S. Because of diminished air quality, vehicle idling is prohibited in many countries due to its harmful environmental effects.

Government fleets have unique requirements for environmental and sustainability management  when it comes to reduction or mandates for greenhouse gas emissions. Electrification transition goals for EV and plug-in hybrid vehicles, and optimizing vehicle inventory is directly tied to public funds and taxpayer dollars. Government agencies use smart tools to monitor fuel management, idling and idle time, fuel costs, and PTO monitoring, electrification and electric vehicle transitioning and monitoring. Idling is common with public fleets, and can be complex to monitor, especially public works vehicles when power take-off (PTO) is engaged. Advanced telematics tools can help analyze idling and PTO to identify waste for optimization.

With idling directly contributing to air pollution, drivers are adversely affected by proximity. Gasoline is made up of carcinogenic components and chemicals. Breathing the air surrounding an idling vehicle can lead to heart disease, damaged lungs, asthma, or other respiratory issues.

Leaving a vehicle unattended and idling exposes it to theft. Would-be thieves can get into the vehicle and drive off. Thanks to today's fleet management solutions with GPS tracking, the chances of vehicle recovery are better than ever. However, the theft still causes inconvenience and leads to unexpected, costly downtime.

Anti-idling laws and initiatives in the U.S.

Currently, there are no federal laws regulating idling. However, thirty-one states and Washington, D.C., limit idling time in some or all vehicles. Some states have more stringent regulations than others. State thresholds, tolerances, and fine amounts vary, with many local municipalities enacting their own anti-idling legislation. This lack of concurrence and disparity requires traveling truckers to be aware of local laws, causing confusion and complaints.

While there is no federal oversight on idling reduction, several federal agencies focus on anti-idling research, economic incentives, and education. The U.S. Department of Energy sponsors programs that research anti-idling technologies as part of a broader goal to bring idle reducing technologies to vehicle assembly lines. Similarly, the Environmental Protection Agency has also implemented programs to promote idle reduction, such as the SmartWay Transport Partnership and the Clean School Bus Campaign.

What are idle reduction technologies?

Idle reduction technologies (IRTs) reduce vehicle idling by using an alternative technology installed on a vehicle. These technologies are energy sources that provide functions like air conditioning, or electricity, allowing drivers to shut down their engines during extreme weather.

The EPA has verified five types of IRTs to reduce emissions on heavy-duty trucks.